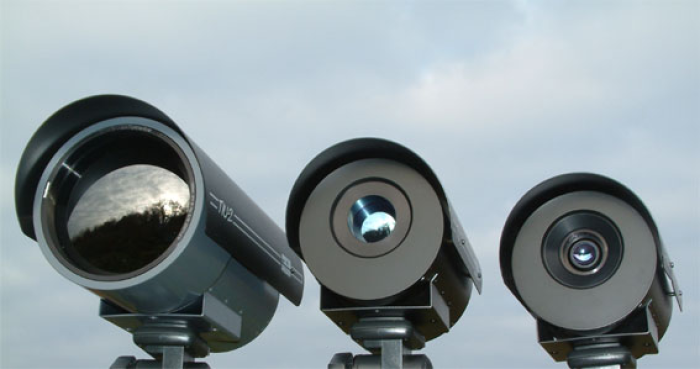 Different from low-light imaging methods of night vision (which require some ambient light in order to produce an image), thermal imaging night vision methods do not require any ambient light at all. They operate on the principal that all objects emit infrared energy as a function of their temperature. In general, the hotter an object is, the more radiation it emits. A thermal imager is a product that collects the infrared radiation from objects in the scene and creates an electronic image. Since they do not rely on reflected ambient light, thermal imagers are entirely ambient light-level independent. In addition, they also are able to penetrate obscurants such as smoke, fog and haze. There are two types of thermal imaging detectors: cooled and uncooled. Cooled detector infrared cameras require cryogenic cooling to very cold temperatures (below 200K). Uncooled detector infrared cameras are typically either temperature stabilized (at room temperatures) or entirely unstabilized. Thermal images are normally black and white, where black objects are cold and white objects are hot. Some thermal cameras show images in colour. This simulated colour is an excellent way to more effectively distinguish between objects at different temperatures.

HOW THEY WORK:
Cooled infrared detectors are typically housed in a vacuum-sealed case & cryogenically cooled. The detector designs are similar to other more common imaging detectors and use semiconductor materials. Differently, it is the effect of absorbed infrared energy that causes changes to detector carrier concentrations which in turn affect the detector's electrical properties. Cooling the detectors (typically to temperatures below 110K, a value much lower than the temperature of objects being detected) greatly increases their sensitivity. Without cooling, the detectors would be flooded by their own self-radiation.

Materials used for infrared detection include a wide range of narrow gap semiconductor devices, where mercury cadmium telluride (HgCdTe) and indium antimonide (InSb) are the most common.

HOW THEY WORK:
Unlike the cryogenically cooled detectors described above, uncooled infrared detectors operate at or near room temperature rather than being cooled to extremely low temperatures by bulky and expensive cryogenic coolers. When infrared radiation from night-time scenes are focused onto uncooled detectors, the heat absorbed causes changes to the electrical properties of the detector material. These changes are then compared to baseline values and a thermal image is created. Despite lower image quality than cooled detectors, uncooled detector technology makes infrared cameras smaller and less costly and opens many viable commercial applications.

Uncooled detectors are mostly based on materials that change their electrical properties due to pyroelectric (capacitive) effects or microbolometer (resistive) effects.