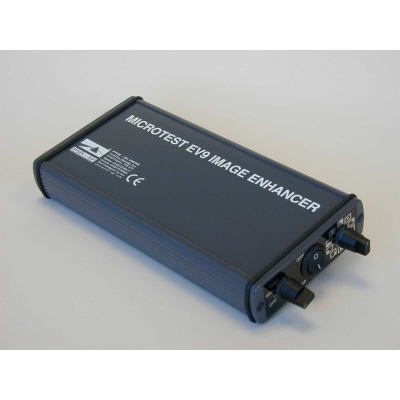 The EV9 Image Enhancer is ideal in situations where there is low light, smoke, haze, fog or rain.

The EV9 Image Enhancer is particularly good at seeing through net curtains and scrim.

This surveillance kit electronically processes any incoming video signal for maximum image production . It transforms hard to distinguish scenes as seen through a CCTV or video camera into brilliant and crisp images viewed on a monitor, video recorder or printer. The EV9 competently handles monochrome and colour video signals according to CCIR or EIA standards.

With 10 windows, it allows a range of local enhancement according to application . Running off a standard 12V DC input, the EV9 Image Enhancer is simple to operate and can be used in conjunction with both live video feeds and pre-recorded surveillance tapes. Having enhanced recorded video footage once, it can then be enhanced a further 2 to 3 times.

The EV9 Image Enhancer is also effective in enhancing situations of over exposure.

With the EV9 Image Enhancer in line between the camera/CCTV/Thermal Imager and monitor, simply turn on the unit to assess the results.

The EV9 Image Enhancer is effective when used in-line to enhance images post production, that is, the image can be enhanced in excess of 5 times before degradation becomes evident.

The EV9 Image Enhancer is employed extensively by security and intelligence forces throughout the world to improve surveillance material. It minimises effects caused by poor atmospheric conditions such as fog, rain and flare from the sun making it ideal for surveillance in poor weather. Its ability to eliminate glare from vehicle headlights and street lamps allows the user to identify otherwise obscured number plates and persons or objects indistinguishable in back lit areas. Such identification is further aided by the rocker switch function which allows greater line definition and general crispness. The EV9 Image Enhancer also lightens dark zones, aiding the identification of persons or objects hidden in the shadows and reduces obscurity caused by net curtains.

This footage is supplied to assist you in obtaining an overview of what is achievable with the kit. It doesn't represent the kit's full capabilities.